Is renewable energy necessarily green? Only if it can generate electricity without adding more carbon to the atmosphere.

Power utilities across Canada and around the world are ramping up their renewable energy sources, and adding wind to their supply mixes because it seems so clean, so green. 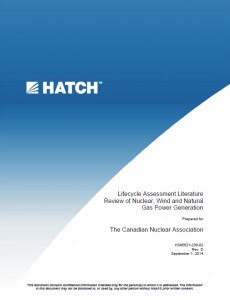 It’s an apples-to-apples comparison: Nuclear plants generate around the clock, but wind plants operate only when the wind blows. To match a nuclear plant’s output, a wind farm needs backup.

The replacement power usually comes from hydro dams, which can open additional gates to raise electrical output, or from natural gas plants that fire up additional burners. Gas plants are faster and easier to build than hydro dams, so they often supplement wind farms.

Looking at actual generation data, the Hatch team estimated that wind farms produce only 20 percent of their potential, and assumed that natural gas plants would make up the difference.

The analysis estimated nuclear power emitted 18.5 grams of greenhouse gases per kilowatt-hour (kWh) through the entire life cycle, compared to 385 grams per kWh for wind backed by natural gas. In other words, a decision to invest in wind plants is actually a decision to produce climate-changing greenhouse gases.

“When considering wind backed by natural gas power (20%/80%) to compensate for intermittency, emissions from the modified grid mix closely resemble that of natural gas production, diluted by a low-emissions power source,” the study noted.

To the average person, the term “renewable energy” suggests an energy source that does not contribute to climate change. But “renewable” doesn’t always mean “low-carbon.” A closer examination, such as the Hatch study, shows that nuclear energy is the better choice for the climate.