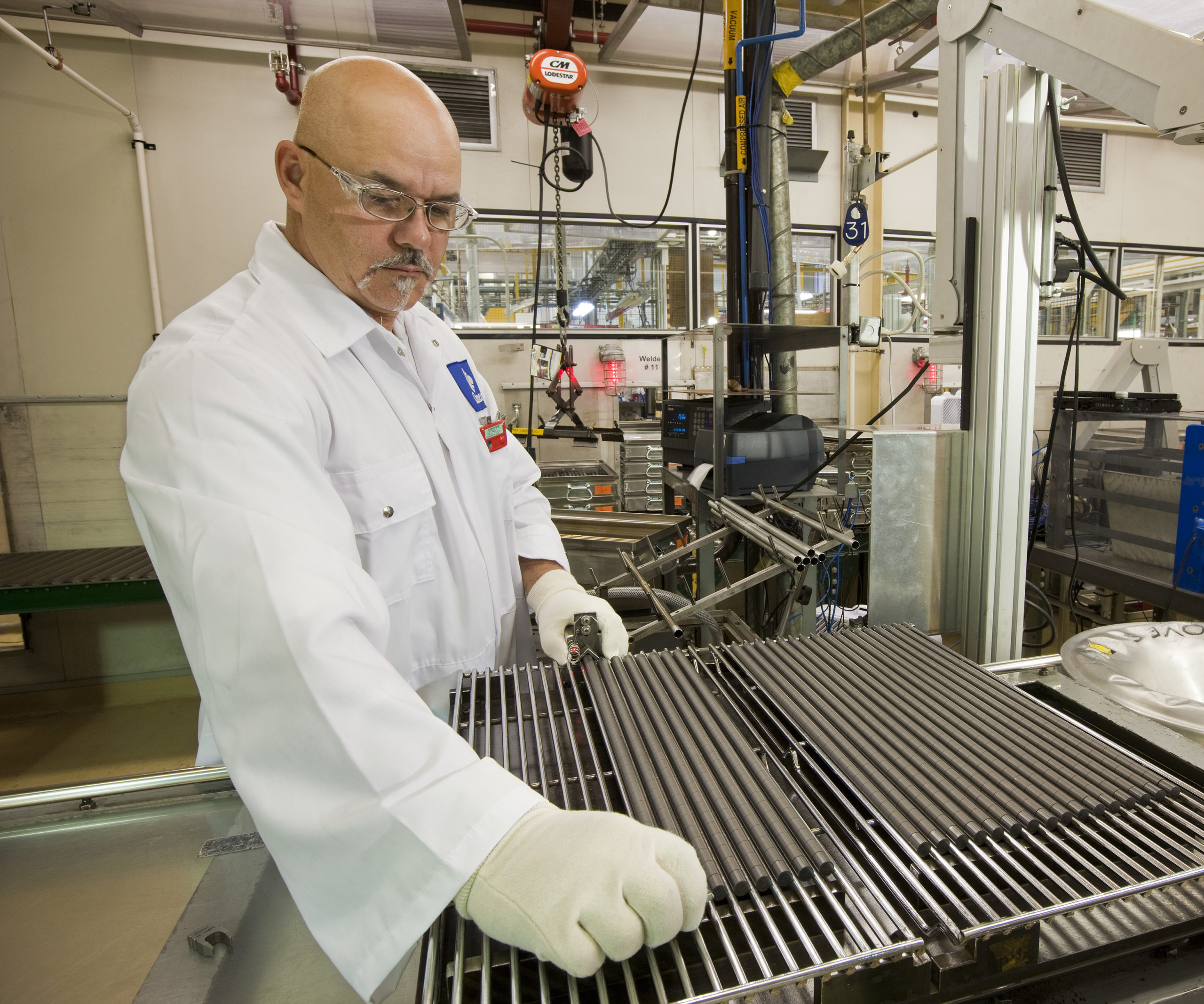 Nuclear fuel is very energy dense, so a nuclear reactor needs very little fuel. Uranium pellets weigh about 20 grams each (a little less than the weight of a AA battery).

Fewer than 10 pellets are needed to power the average Canadian household for a year (would 10 AA batteries power your house for a year?). Generating the same amount of electricity as one uranium pellet would require 410 litres of oil or 350 cubic metres of natural gas.

Uranium’s transformation from ore into nuclear fuel and the handling of waste products is called the nuclear fuel cycle.

Uranium occurs naturally in the Earth’s crust. It is about as common as tin and 500 times more abundant than gold. Traces of natural uranium can be found in all rocks and soils, rivers and oceans, as well as in food and in human tissue.

Most Canadian uranium is mined in northern Saskatchewan’s Athabasca Basin. This region has some of the world’s highest grade uranium deposits, with concentrations more than 100 times the global average. There are also uranium resources in Nunavut, Ontario, Quebec and the Northwest Territories that have not been mined.

Uranium ore is extracted from the ground in one of three ways: open pit mining, underground mining or in-situ recovery.

The ore is crushed in a mill and ground to a fine slurry. Acid is added to the slurry to remove the uranium from the other minerals. The uranium is then purified to produce uranium oxide (UO2) powder.

Blind River, Ontario, is home to Canada’s only uranium refining facility. Owned and operated by Cameco, it is the largest in the world. Here, the uranium is separated from impurities through a series of chemical processes. These processes include digestion, solvent extraction and nitrogen removal. These refinement methods produce high-purity uranium trioxide (UO3).

The uranium conversion process for CANDU heavy water reactors involves converting UO3 to uranium dioxide (UO2). This takes place in Port Hope, Ontario, at Canada’s only uranium conversion facility. Nitric acid and ammonia are added to UO3, which is then fed into a special kiln operating with special gasses to prevent extra oxygen from mixing with the pellets.

The conversion process for light water reactors involves adding fluorine to UO3 to create the gas uranium hexafluouride (UF6). This chemical form is particularly suitable for separating out the different weights of uranium (different isotopes of uranium weigh different amounts).

Natural uranium has too low a concentration of uranium-235 (its reactive isotope) for light water reactors. For these reactors, uranium enrichment increases the U-235 concentration from 0.7 per cent to about three to five per cent. Enrichment involves separation of the lighter U-235 atoms from the heavier and more common U-238 atoms.

Fuel manufacturing begins by pressing either natural or enriched UO2 powder into small cylindrical shapes, measuring about 10 to 13 millimetres long and eight to 13.5 millimetres in diameter. (Three of these cylinders placed end to end would look like an AA battery. Although, they’re much denser, so one cylinder would have the same weight as the AA battery.) These pellets are then baked at 1600 to 1700 °C, making them stronger and even denser.

The pellets’ surface areas are then ground and finished to precise dimensions to insert them into fuel bundles.

For CANDU reactors, natural uranium fuel pellets are loaded into 28 or 37 half-metre-long zirconium alloy tubes, which are then grouped into a cylindrical fuel bundle. This bundle is the size of a fireplace log, but provides enough electricity for 100 homes for 18 months. The fuel bundles are loaded into horizontal fuel channels (called pressure tubes), which run the length of the reactor vessel (known as the calandria).

About 12 bundles are loaded into each channel, depending on the model. A 790-megawatt CANDU reactor contains 480 channels, 5,760 bundles and more than 5 million fuel pellets. This entire system then provides the electricity needs for half a million families.

Canadian Nuclear Labs at Chalk River, Ontario, has been designing, building and experimenting with nuclear reactors since the Second World War. Canada has been using and refining its…