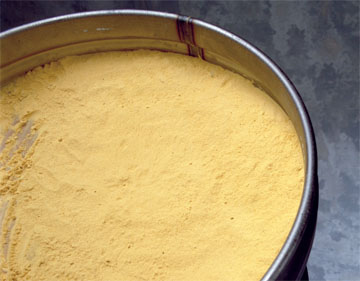 After mining, uranium ore is transported to a nearby mill for processing. The first step is to crush the ore and mix it with water so that it can move through a series of mill circuits. After crushing, the ore is treated with acid in large tanks, to separate the uranium from other minerals in the rock. The uranium is now part of a liquid solution, which is then separated from the other minerals, which remain solid. The uranium-rich solution is then purified through a solvent extraction process and solidified through chemical precipitation. Finally, the uranium is dried. The resulting powder is uranium oxide (U3O8) concentrate, commonly referred to as yellowcake, because it is often bright yellow.

A video animation of milling is available on the Cameco Corporation channel on YouTube. 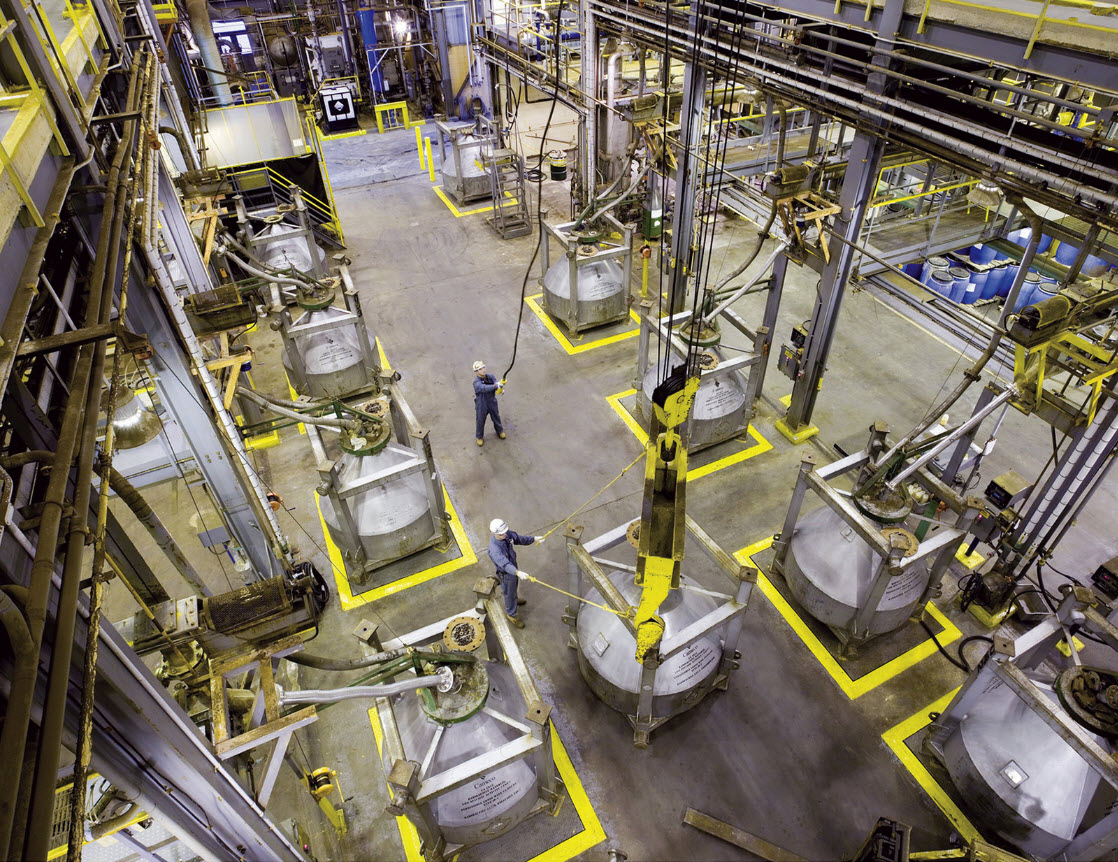 Blind River, Ontario, is home to Canada’s only uranium refining facility. Owned and operated by Cameco, it is the largest such facility in the world. Here, the uranium is separated from impurities through a series of chemical processes, including digestion, solvent extraction, and denitration. These refinement methods produce high-purity uranium trioxide (UO3).

The uranium conversion process for CANDU heavy water reactors involves converting UO3 to uranium dioxide (UO2). This takes place in Port Hope, Ontario, home to Canada’s only uranium conversion facility. Nitric acid and ammonia are added to UO3, which is then fed into a special kiln operating with a reduction atmosphere.

The conversion process for light water reactors involves converting UO3 to uranium hexafluouride (UF6), a chemical form suitable for enrichment. During this process, the UO3 is combined with fluorine compounds to create UF6.

Video animations of the refining and conversion processes are available on the Cameco Corporation channel on YouTube.

Natural uranium has too low a concentration of uranium-235, its reactive isotope, for light water reactors. For these reactors, uranium enrichment increases the U-235 concentration from 0.7% to about 3 – 5%. Enrichment involves separation of the lighter U-235 atoms from the heavier and more common U-238 atoms. 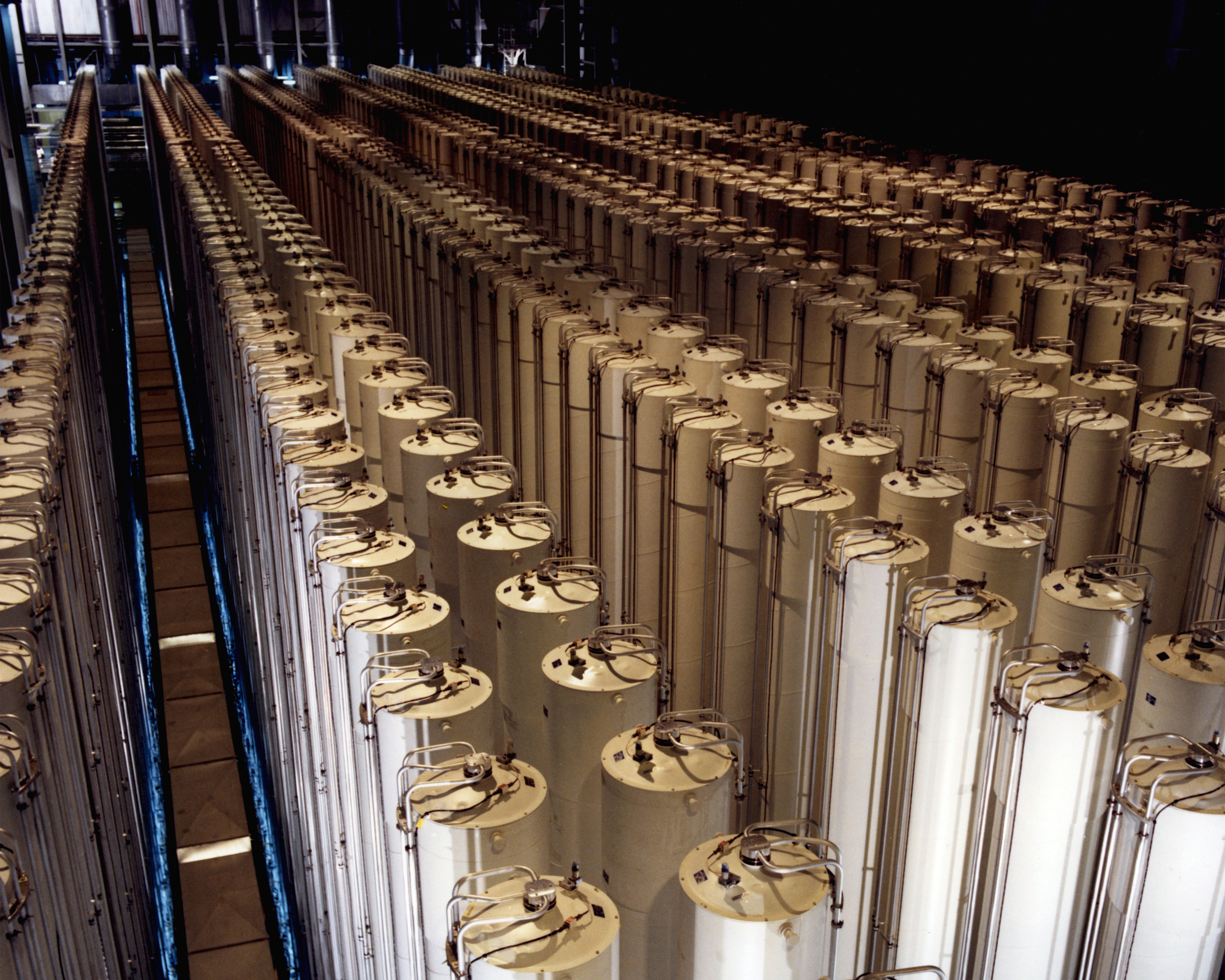 There are two enrichment methods used at a commercial scale today:

Before the concentrated UF6 can be used in light water reactors, it is chemically transformed back into UO2 powder, which can then be processed into pellets.

Fuel manufacturing begins by pressing either natural or enriched UO2 powder into small cylindrical shapes, measuring about 10 – 13 millimeters long and 8 – 13.5 millimeters in diameter. These pellets are then baked at a high temperature (1600 – 1700°C), where they acquire strength and density. 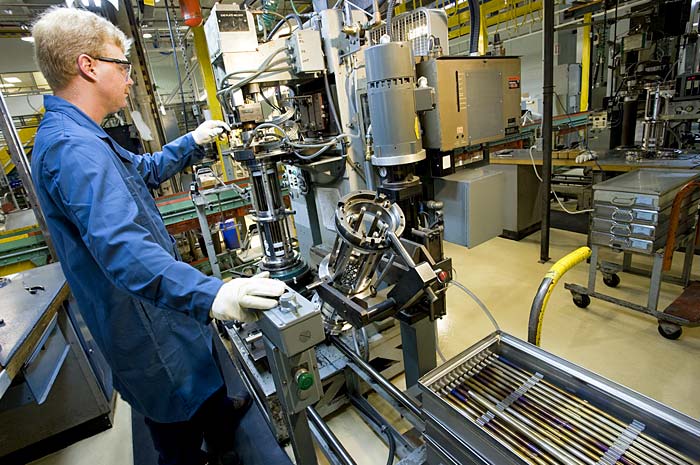 The pellets’ surface areas are then ground and finished to precise dimensions to ready them for insertion into fuel assemblies.

For light water reactors, about 300 enriched uranium fuel pellets are packed in thin, four-metre tubes called fuel rods, made of zirconium alloy. Over 250 rods are then grouped together into a bundle called a fuel assembly.

A pressurized water reactor (PWR) is the most common type of nuclear reactor, and holds between 150 and 265 fuel assemblies with 12 – 20 million uranium fuel pellets.