An atom and a 3D printer may drive the next generation of vehicles. That’s the idea behind Russian automobile designer Grigory Gorin and his concept for a nuclear fusion powered car. 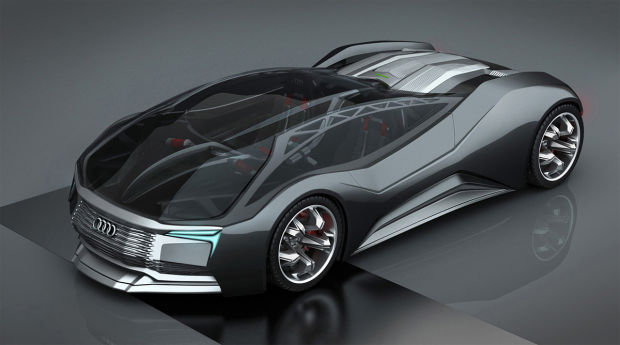 The AUDI Mesarthim F-Tron Quattro concept car was inspired in part by Michel Laberge.  Dr. Laberge founded General Fusion in 2002 with a goal of creating a future powered by energy from nuclear fusion.

This past spring, the work of General Fusion was acknowledged by Sustainable Development Technology Canada (SDTC) with a grant of just over 12 million dollars to further the research into fusion power.

“I think it’s a really terrific idea. I love it,” exclaims Gorin. “I’m very inspired when I see people that are involved in finding solutions to issues related to clean and secure energy.”

Gorin’s fascination with cars dates back to his childhood. The AUDI Mesarthim, named after one of the Aries star constellations, would transform automobile production, producing minimal environmental impact while providing virtually unlimited power.

The stars in our solar system are energized by nuclear fusion. In the center of the star, the fusion process takes place when two atoms come together to form a heavier atom, releasing a tremendous amount of energy.

The concept of the car is quite simple. As the electric car speeds up and generates energy, the reactor would be activated. Four Kinetic Energy Recovery Systems (KERS), systems which recover excess energy and store it in a battery, would serve as back-up support. A small amount of hydrogen would fuel the reactor.

Gorin was inspired by the changing state of ecology in his region of Russia.

“I’ve observed completely abnormal temperatures. (As an example), 2010 was so hot that forests began to burn,” states Gorin. “Winters have (also become) very warm, this year there was no snow in December and February and it was raining,” he says.

Concern for Russia’s environment has reached the Kremlin. President Putin, looking to raise public attention to environmental problems has made 2017 the Year of Ecology in Russia.

While Gorin’s invention is still years away from becoming a reality, he believes that the cars of the future will be able to carry an on-board device to produce energy such as a fusion reactor.

“The reactor can be installed on any chassis with any body so it can provide energy where needed,” he states. “It could also probably be used in conjunction with non-motile (stationary) reactors,” according to Gorin.

His proposed car would rarely, if ever, need refueling and wouldn’t produce harmful emissions like current fossil fuel powered vehicles.