The Canadian nuclear industry is proud of its safety record and is a leader in the industry worldwide. Public and employee safety are the top priorities of Canada’s nuclear facilities.

In Canada, no member of the public has ever been harmed as a result of nuclear power plant operations. 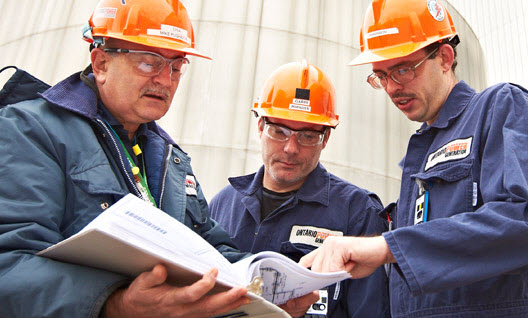 Nuclear workers haven’t been exposed to dangerous levels of radiation since 1952, when the NRX reactor suffered a partial meltdown. The industry learned from this incident, which stemmed from operator error and mechanical problems in the reactor’s shut-off systems, and used it to improve reactor safety systems, ensure that reactors can be shut down automatically, and make the machine interface more intuitive to its operators. In the six decades since, such an incident has never recurred.

Early incidents such as these prompted all players in the Canadian nuclear industry to make safety an integral part of its culture, and to continue to learn from experience.

The nuclear industry is also one of the most strictly regulated and closely monitored industries in the world. In Canada, the Canadian Nuclear Safety Commission (CNSC) has the sole responsibility for regulating, licensing, monitoring, and inspecting all activities and facilities that use nuclear material. The CNSC is a Crown corporation that reports to Canada’s Minister of Natural Resources. Nuclear power generation is also the only energy technology with a United Nations oversight agency: the International Atomic Energy Agency (IAEA).

Over the course of decades, high-profile safety incidents at nuclear facilities around the world have raised public concern about nuclear power. Canada’s nuclear industry responded to these incidents by reviewing its own facilities and its security protocols and standards – and, when necessary, made changes to them.

The most recent such incident took place at Fukushima (Japan) in March 2011, and Canadian nuclear operators launched a thorough assessment of their operations to confirm the safety of back-up power systems and the ability of the facilities to withstand natural disasters. In October 2011, the CNSC released its Fukushima Task Force Report, which concluded that all Canadian nuclear power plants are safe, and that the plants are designed to withstand conditions similar to those that triggered the Fukushima event.

For more information on safety measures, Bruce Power released a video on its YouTube channel.