Ontario Power Generation plans to store all of the province’s low- and intermediate-level nuclear waste underground, beneath 680 metres of rock and clay at a site near Kincardine, Ontario. This Deep Geologic Repository (DGR) will also be about 1.2 kilometres from Lake Huron. Most Kincardine residents support the idea, but others are concerned.

So, why store nuclear waste there? 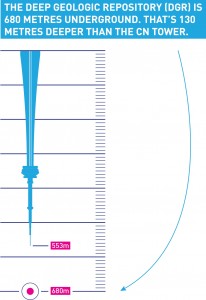 In public consultations, the most-common concern was that radioactive material might seep through the rock and contaminate the lake. But the report from a federal government review panel that studied the DGR says that it would take water about 10 million years to move just one metre.

Some critics fear that an earthquake could change this. But the rock in the area has been undisturbed for a million years. Burying the waste in rock also lessens the risk, because a DGR would not be affected by surface hazards such as flooding.

Critics are concerned about the amount of radiation stored in the Kincardine DGR. However, the Kincardine DGR will not store spent fuel.  It will only store low- and intermediate-level waste. This includes items such as mops, protective clothing, water filters, or replaced mechanical parts. This material is much less radioactive than spent fuel. Also, radioactivity reduces over time. Radiation from intermediate-level waste would fall by about three-quarters over 100 years after closure, according to the Joint Review Panel.

Some people worry about having nuclear waste buried nearby. And some First Nations people think the DGR might reduce the spiritual value of the land, or infringe on their treaty rights. These concerns must be addressed because public acceptance is essential. OPG plans to continue engaging with the community.

As Kincardine’s mayor, Anne Eadie, says of her community, “We live here, we too are concerned about safety, and we love our lake. We’re satisfied that due diligence has been done.”

Dr. William Leiss, who led a risk assessment of four ways to manage the nuclear waste, agrees. He says, “By far the safest option for the low- and intermediate-level nuclear waste is emplacement in a deep underground chamber in the sedimentary rock at the Kincardine site. I believe that it is extremely unlikely that any radiation generated by the waste will ever escape from that chamber.”