Nuclear technology is helping to make history on the solar system’s icy planet.

A “Pluto Not Yet Explored” stamp has pasted itself into history books after travelling more than 3.2 billion miles, over 5 billion kilometers, to Pluto and beyond. 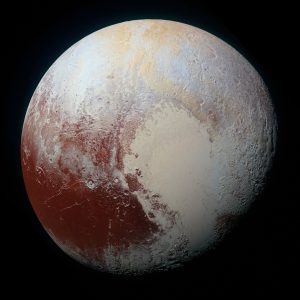 The mission has landed NASA a spot in the Guinness World Record Books.

The accomplishment is no small feat. NASA’s New Horizons spacecraft was first launched just over 10 years ago, in early 2006, to study Pluto and the Kuiper Belt close-up. Cold, dark and almost 4 billion miles away from the sun meant that solar power, batteries and fuel cells weren’t viable options to power the mission.

In order to reach the outer icy reaches of our solar system, NASA needed help from an energy source that could survive the most extreme conditions.

So for Pluto, NASA went nuclear.

“We needed a reliable source of power and we’ve put a great deal of money and research into them (the power supplies) so that was really the way to do the mission and  have the highest reliability to run the space craft,” states Dr. Ralph McNutt, principal investigator for the New Horizons Pluto Energetic Particle Spectrometer Science Investigation (PEPSSI), from the Johns Hopkins University Applied Physics Laboratory in Laurel, Maryland.

It’s called a radioisotope thermoelectric generator or RTG for short. Think of it as a “nuclear battery” to power spacecraft. RTGs are powered by an isotope known as plutonium-238, an artificial element which has a half-life of almost a century. As this isotope decays it produces heat which is converted into electricity. The electricity required to power the Pluto mission is about 200 watts, the same as using two one-hundred watt light bulbs.

In deep outer space exploration mere seconds can make all the difference.

“Pluto takes approximately 250 years to get around the sun so you have to really know where Pluto is,” according to McNutt.  “We were off by 85 seconds at closest approach [in July 2015], which was really good, but you have to realize we were travelling at 14 kilometers per second. Times that by about 100 seconds and that’s almost 1,400 kilometers, a little bit more than the radius of Pluto.”

In order not to miss out on the opportunity to capture a picture of the dwarf planet, the team of scientists instructed the camera to take pictures of a larger amount of outer space, so that they wouldn’t miss Pluto or its moons as the spacecraft flew by.

Since the miniature planets discovery almost 100 years ago, in 1930, little was known about Pluto. In 2015, images of the planet sent back by New Horizons raised new questions about our solar system. The images sent back reveal glacier-like activity, among many other features, providing new information on the history of our solar system.

The Guinness World Record – awarded for longest distance traveled  for a  postage stamp that engineers affixed to the spacecraft shortly before launch – came around the same time that NASA celebrated 40 years of robots on Mars. Soon, NASA will launch Mars2020 as a first step to hopefully bring back to earth a sample of soil from the Red Plant; a potential space accomplishment made possible thanks to nuclear power.