The next time you look at your electricity bill, keep in mind that electricity from nuclear plants is the second least expensive form of power in Ontario. Water power is slightly cheaper but almost all of Ontario’s commercially viable water generation capability is already developed.

There is a perception that nuclear power is expensive. This is largely due to the high upfront costs in building or refurbishing nuclear reactors.

But because these costs can be amortized over several decades, the end result is a low-cost reliable baseload source of electricity. Nuclear doesn’t increase your power bill. In fact, it helps keep it down. 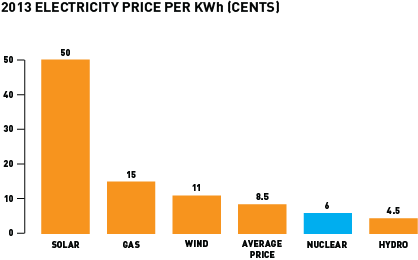 The average price for electricity in Ontario in 2013 was 8.5 cents per KWh.

Nuclear was six cents per KWh in 2013. The only thing that was not more expensive was hydro, which was 4.5 cents per KWh.

“With rates paid for nuclear today at 30 per cent below the average price of electricity in Ontario, nuclear refurbishment will ensure price stability for decades to come from sites with existing transmission infrastructure,” Robert Hattin, chair of Canadian Manufacturers & Exporters, recently wrote in an op/ed for the Toronto Sun. 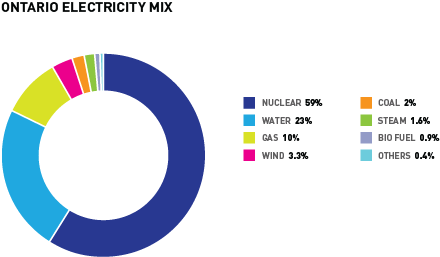 Both baseload nuclear and hydro are far less expensive than the peaking sources of electricity, with solar at 50 cents, gas at 15 cents and wind at 11 cents per KWh.