“You can safely stand next to them, knowing the radiation is safely contained,” says Val Bevacqua. He is in charge of used-fuel storage for Ontario Power Generation (OPG), which owns all the Ontario reactors that generate electricity.

What makes them safe? They’re made of concrete more than half a metre thick and lined with steel plate. Each of these large, white bins stands about four metres high and weighs 60 tonnes – empty.

Once the spent fuel goes in, skilled workers weld the container shut, vacuum-dry the interior, pump it full with inert helium, and test rigorously for leaks.

Used fuel is very hot and radioactive. A robot removes the fuel bundles from the reactor and places them in bays that look like swimming pools. Despite the strong radiation, Val says, “just a few metres of water can provide a remarkable protective shield for workers and environment from the radiation.”

After about 10 years, the fuel bundles cool and lose most of their radioactivity. Then, nuclear workers use remote tools to place the fuel in the dry storage containers, which are kept on-site. 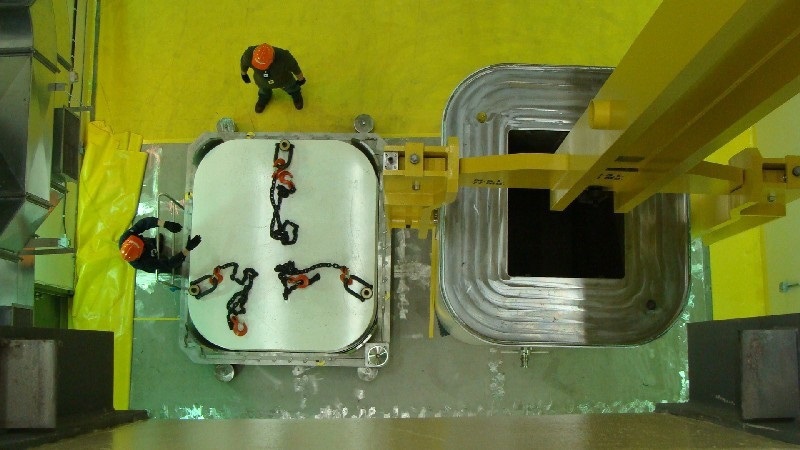 OPG employees are the operation’s core strength. They are all highly trained, and kept safe by radiation-protection equipment and dosimeters.

OPG’s used-fuel storage faces regular inspections by regulators, and the inspectors also make surprise visits. The inspectors track every fuel bundle. And they ensure that the storage containers haven’t been tampered with.

Onsite storage has worked well. The containers are safe and secure. But the sites have to be managed and guarded, and the containers won’t last forever. Eventually, Canada intends to store all used fuel underground, at a site with the right geology and a willing host.

Communities that have shown interest in hosting the permanent site are learning more through OPG. “We’re part of the community, and we host a lot of tours,” says Val.

“Tours are an opportunity for communities to see for themselves what is involved in the safe handling of nuclear fuel and how these hazards can be safely handled without risk to the workers, the public, or the environment.”