The worst nuclear accident occurred in 1986 at the Chernobyl nuclear power station, sixty miles north of Kiev, Ukraine, in what was then the Soviet Union.

Here’s a spoiler: Almost all the problems associated with the Chernobyl incident were particular to the Soviet-era reactor and the secretive government response.

The Chernobyl accident was a unique event at a type of rudimentary reactor complex that was becoming rare in the Soviet Union, and no longer exists at all.

It is almost impossible that an accident like the one at Chernobyl could happen in a commercial nuclear plant found in Canada or the U.S.

The RBMK reactor at Chernobyl was never built by any country outside the USSR because it is a flawed design.

It is also significantly different from Canadian CANDU reactors in several ways as the chart from Atomic Energy of Canada Ltd below shows. 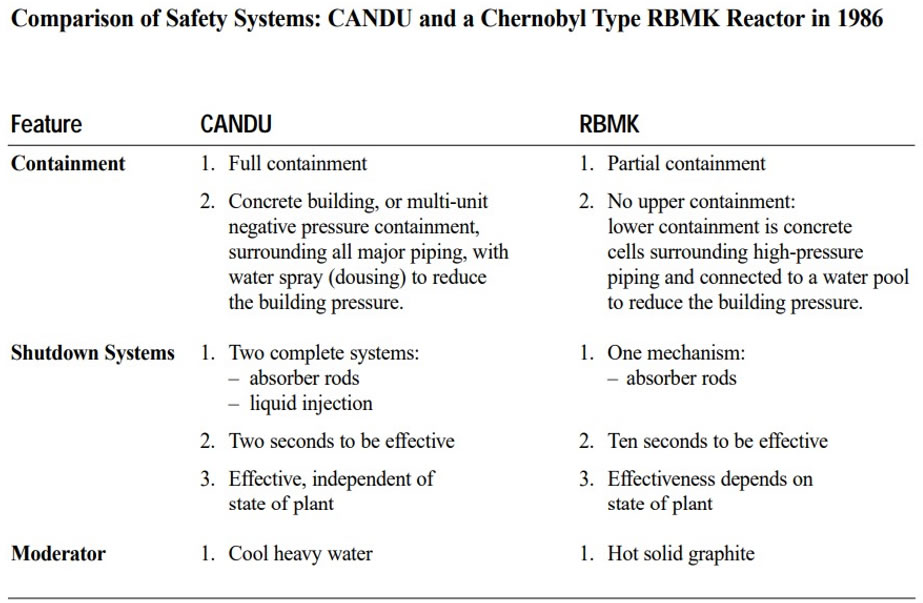 Containment is an airtight building made of concrete and steel that prevents harmful radioactivity from escaping the reactor in the event of an accident.

The Chernobyl reactor had no containment. The key factor in the widespread dispersion of radioactivity was the energy released from the burning graphite moderator and the absence of a containment structure capable of withstanding that energy.

CANDU reactors, like most Western designs, have a containment structure designed for its maximum credible accident, while its moderator is low-temperature, low-pressure water instead of graphite.

Chernobyl also lacked other safety mechanisms that are considered standard design in the rest of the world. 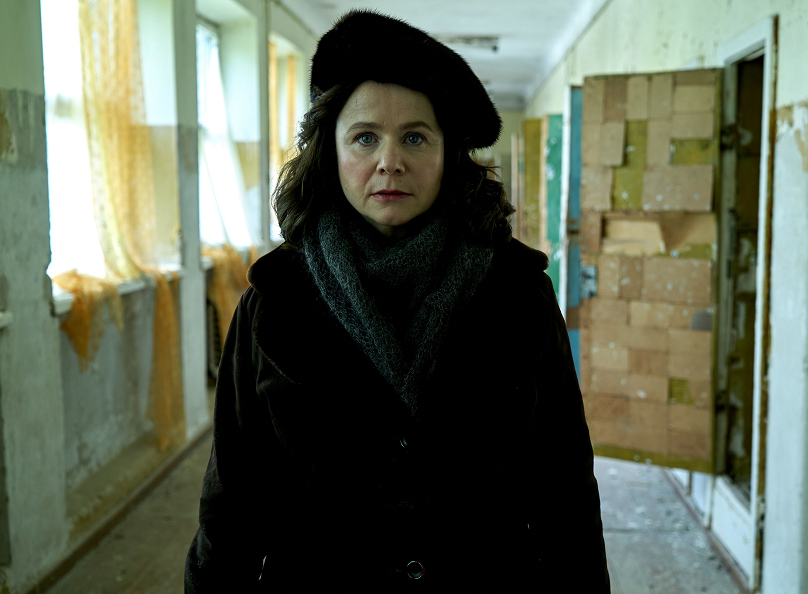 The root cause of the Chernobyl accident was a design flaw in the shut-down system that no other reactor in the world has.

The CANDU and RBMK designs have some fundamental differences. CANDU reactors use a heavy water moderator, while RBMK use graphite. Graphite can be a very useful material in a safe reactor design. But in an unstable design like the reactor at Chernobyl, it was fuel for the fire that resulted from the explosion.

The International Atomic Energy Agency (IAEA) concluded that a “lack of safety culture” existed within nuclear power plants in the former Soviet Union, including Chernobyl.

Chernobyl was a testament to the former Soviet Union’s poor construction materials and techniques, and absence of safety culture.

In the years prior to the accident, managers ignored safety rules laid down by engineers so production quotas could be met. Workers and lower-level managers were afraid to raise objections when they saw something wrong.

In 2006 the UN Scientific Committee on the Effects of Atomic Radiation (UNSCEAR) undertook a study to follow up on health effects.

Of the plant staff and emergency workers exposed to the huge core doses and toxic smoke at Chernobyl, 28 died from acute radiation sickness.

The UNSCEAR report also said Chernobyl was responsible for a “substantial fraction” of about 6,000 thyroid cancers among people who were children or adolescents at the time of the accident. By 2015, 15 cases had proved fatal.

“To date, there has been no persuasive evidence of any other health effect in the general population that can be attributed to radiation exposure,” the study concluded.

According to a 2005 World Health Organization (WHO) report, a maximum of 4,000 people might yet exhibit some ill effects as a result of radiation exposure attributed to the Chernobyl release (as opposed to other sources of radiation, such as natural background radiation or medical procedures).