Immediately after the March 2011 accident at Fukushima Daiichi, the operators of Canadian nuclear power plants inspected their stations to verify their preparedness for external hazards and severe accidents.

Supported by the Canadian Nuclear Safety Commission (CNSC), the operators looked at each plant’s earthquake risk, its fire-protection readiness, its ability to produce back-up power, its ability to control excess hydrogen inside containment structures, and its ability to keep its spent fuel cool.

The CNSC Task Force was only the first wave of Canadian investigation following the Fukushima accident; the CNSC shares information with other organizations monitoring the nuclear industry worldwide and will continue to assess health effects of the disaster for decades. The CNSC posts relevant documents and findings on the Fukushima and Health page of its website.

The CNSC’s Fukushima Task Force Report stated that the tsunami risk at the Darlington, Pickering, and Bruce Power generating stations is very low, given their location on the Great Lakes. The geological stability of the underlying Canadian Shield also minimizes the risk of earthquakes and tsunamis.

The Gentilly-2 plant in Bécancour, Quebec faces a minimal tsunami risk. No tsunamis have ever occurred in the region. The nearest probable source of earthquakes,the Charlevoix region,is more than 100 km away.

The Point Lepreau generating station near Saint John, New Brunswick could face a tsunami risk from an earthquake in the Bay of Fundy or Passamaquoddy Bay. There is no evidence, however, that such an earthquake has ever occurred.

Reviewing the inspection reports, the CNSC Task Force concluded that all Canadian nuclear power plants met or exceeded the safety requirements of their design. The CNSC also reported minor concerns– particularly, that analyses had not yet shown that a hot and pressurized reactor that has lost its core cooling could be brought to a cold, depressurized state and held there for a prolonged period. 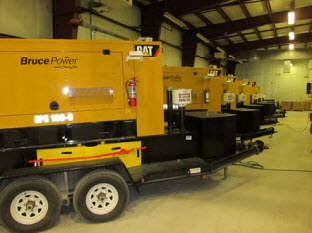 The CNSC noted that nuclear facilities other than power plants do not face the same fuel-cooling challenges as nuclear power plants do. Nevertheless, they too needed to complete safety assessments within the same short- and medium-term deadlines, and a long-term deadline of December 2016.

Each generating station has assessed how it would respond in the unlikely event that an accident that eliminates the use of all cooling systems. The results varied for each station, but common themes emerged: